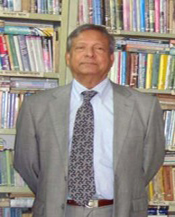 He served as an advisor to the International Monetary Fund and the United Nations, and was Bangladesh’s Finance Minister from September 1988 to May 1990; current Foreign Minister Dr. Abdul Momen expressed the government’s sorrow at his passing and gratitude for his service. Wahid was very much involved with the Bangladesh Liberation War and was an advisor to Sheikh Mujibur Rahman, Bangladesh’s first president. He also advised BRAC.

Wahid maintained strong ties with Bangladesh throughout his life. He founded, for example, the International Centre for Economic Policy Research, a non-profit, non-partisan research organization focused on the better understanding of the Bangladesh economy and its key policy challenges, both domestically and in the context of a rapidly changing global marketplace.

He is survived by his wife, Maliha, and children, Tatjana Haque, Sikander Michael Haque, Farhan Anwar, Farzan Anwar, and Mimosa Haque. The University of Toronto and all former colleagues and members of the Departments of Economics and Mathematics offer their condolences to Wahid’s family.

A memorial event will be held at a later time.