‘Journeyman Plumber’ Hangs Up His Tools

In 1962, a 16-year-old working-class youth in England walked out of the school gates and into the world of work. Fast-forward to 2018: the now rather more mature Gordon John Anderson – Professor Anderson – retires from the University of Toronto, having spent some 30 years here teaching, researching and contributing in numerous ways to UTM’s administration. Prior to his U of T appointment, Professor Anderson held appointments at the economics departments of the University of Southampton and McMaster University. At the St George department’s gathering to mark the end of the academic year, chair Ettore Damiano invited remarks from Gordon’s colleagues Varouj Aivazian, Rob McMillan and Angelo Melino who recognized Gordon’s impressive contributions over his three decades at U of T.

A change of direction

Having gone straight into employment as a teenager, in his early twenties Gordon decided that he wanted his life to change. He completed his high school education, secured a university place and walked back into school to stay. He attended the University of Newcastle having, as he readily admits, chosen the institution because that would allow him to regularly attend the games of his beloved soccer team, Newcastle United. He retains that passion to this day, despite the ribbing from fellow football fan and UTM colleague Rob McMillan that supporting Newcastle “can be a painful rollercoaster ride. Actually, more like being handcuffed to the back of the rollercoaster”. (Rob, it should be noted, is an ardent supporter of Manchester United.)

Gordon is nothing if not committed, however, and consistently follows through with great determination. After BA graduation, he went on to the LSE for a two-year master’s in econometrics and mathematical economics. “In the first year, you had to do theory and econometrics,” said Gordon, “and I somehow came top in the theory course.” Professor Frank Hahn was a faculty member at the time, and queried Gordon on why he wasn’t going to specialize in theory. ‘Well,’ Gordon said, ‘I want to be an applied econometrician.’ ‘But,’ came the astonished reply, ‘you’ll be nothing but a humble plumber!’ “That was music to my ears,” Gordon recalled with a wide smile. The apprentice plumber went on to complete his PhD at the LSE and in the following years garnered several awards, including the Bowley Prize (LSE), the Sayers Prize (University of London) and the Journal of Applied Econometrics Distinguished Author Award. He has also held several visiting appointments, delivered numerous faculty seminars and secured a raft of research grants.

Life at U of T 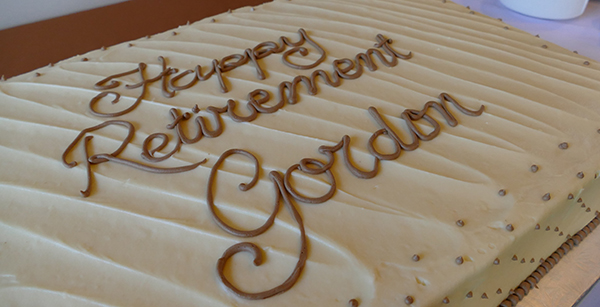 After originally meeting Gordon several years previously, fellow professor Angelo Melino fondly recalled being told that Gordon was under consideration for appointment at U of T. “I was asked my opinion about the possibility and it took me no time at all to say Gordon would be a great colleague,” Angelo said. “It was one of my best and most accurate predictions ever.” Writing solo or with co-authors, Gordon has published more than 50 refereed articles. In 1994, of course, came the much-cited paper, “The Determinants of Success in University Introductory Economics Courses” (with Mel Fuss and Dwayne Benjamin), which – and this remains pertinent in the ongoing debate about the disproportionately male economics sphere – noted that, after controlling for numerous factors, women do worse than men in such courses. Gordon’s subsequent work has mainly been on income inequality, and how it has changed over time and across countries. He has also closely measured the quality of opportunity and mobility between income classes and across generations.

Applauding Gordon’s ability to bring the excitement of research into the classroom, Professor Varouj Aivazian noted that Gordon has taught over 30,000 students in a substantial teaching load comprising statistics, econometrics and empirical welfare economics. In his office hours, “Gordon is polite and respectful, and takes as much time as needed to make sure his explanations are clear. It’s impressive to see his patience and caring for his students.” One student’s summary is typical: ‘Great guy, and the best teacher I have ever had at any level. He just shows up with no notes, cracks a bunch of jokes, grabs some chalk and starts teaching.’

Gordon’s no-nonsense approach has been a valuable asset, too, to the numerous committees on which he has served. “He always speaks up,” Varouj noted, “never shying away from expressing an opinion even if he knows it will be unpopular”. Gordon has been very active in other service to the university – for example, Economics Chair from 1990-95, Chair of the Academic Appeals Board from 2000-11, member of the Academic Affairs Committee, departmental representative from 1995-2000. And this is, as Varouj was quick to point out, just a partial list.

A special symposium for Gordon’s retirement

May 26, 2018, saw a well-attended symposium held to celebrate Gordon’s research contributions, with five guest speakers as well as a presentation from the man of the hour himself. The program of topics and contributors was as follows:

We can be sure that Gordon won’t be satisfied with inactivity after his considerable contributions to economics, teaching and the University as a whole. He will no doubt be pursuing his other interests with characteristic energy: golf, fine wine, painting and – as Angelo Melino put it – “his quixotic attempt to bring back the bow tie”.

December 2017 saw the retirement of undergraduate administrator Robbie Innes who, since March 1991, had provided nearly 27 years of outstanding service to economics students and faculty. In fact, this was her third stint with the University, having worked at U of T twice before in other capacities: a total of well over 30 years contributing to the administration of this institution. Here’s a number to give pause for thought: since Robbie joined the department, she has overseen over 180,000 FCEs for economics courses. That’s a vast quantity of prerequisites checking and a lot of potential issues, too – and doesn’t include those who couldn’t ultimately get into a course! She has worked with six undergraduate chairs, all of whom have benefitted from her perspective and experience, and with a huge number of students who have relied on her advice and detailed knowledge of programs and their requirements.

In order to pay tribute to Robbie’s commitment, and taking inspiration from the well-known “ Twelve Days of Christmas” carol, several faculty members performed a specially composed “Twelve Months of Classes”. With humorous exuberance, they shone light on the trials and tribulations that have faced the stalwart Robbie over her time at the department. Gillian Hamilton, Arthur Hosios, Dwayne Benjamin and Don Dewees, supported by Martin Osborne who managed the accompanying slideshow, namechecked room complaints, ROSI crashes, transfer credits, and email avalanches – not to mention the untold numbers of excuses Robbie has encountered!

As Dwayne Benjamin remarked, “this is a job for marathon runners, not sprinters.” He worked with Robbie during the whole of her 26 years in the department, and served as undergraduate chair for five years: Not only was she “diligent and hardworking, and willing to go the extra mile during times of peak load”, she demonstrated impressive endurance in dealing with the relentless number of student requests to avoid compliance with program rules or course prerequisites. While she was necessarily put in the position of having to say ‘no’ an awful lot of the time, Dwayne noted how “she took great delight in discussing the exceptions, where she was able to make a real difference in helping a student to succeed in our program or to take constructive alternative steps.”

Current undergraduate chair Gillian Hamilton heartily agreed with his assessment, noting Robbie’s conscientious approach: “When dealing with a difficult decision, she would remind herself (and the rest of us!) that we should not construct rules that favour academically exceptional students. Our mandate should be to serve the typical student – often a struggling student with mixed academic success. She would carefully investigate a student’s academic history before rendering a decision or meting out advice.” Gillian added, “Thank you, Robbie – I learned a lot from you! Your dedication and professionalism have been exemplary. You’re also a kind and caring person – we will miss you.”

Taking to the podium following presentation of a gift from the department, Robbie began by expressing her appreciation of the cooperation she has enjoyed from faculty and instructors, as well as from the administrative staff. Particular gratitude went to “the undergraduate team, Jenny [Fan] and Deborah [Navarro], for their support sharing information, for the discussions we’ve had, their advice and opinions – and also the laughs.” Robbie thanked the most recent associate chairs for undergraduate studies – François Casas, Dwayne Benjamin and Gillian Hamilton – for providing a sound foundation to the undergraduate administration.

Robbie has a great interest in art (she is a member of Toronto’s Arts and Letters Club), and will now be able to devote more time to her own creative work. She is looking forward to the luxury of not having to squeeze activities in to all-too-short weekends, as well as the freedom to structure her own days – and having the time to follow up on whatever catches her interest. She referenced Lewis Carroll’s poem, ‘The Walrus and the Carpenter’, wherein the Walrus says, “The time has come to talk of many things” (one of which, you may recall, is whether pigs have wings). Robbie concurred: “A flight of fancy suits me fine,” she said. “I’ll let you know if I figure it out.”

MARKING TWO RETIREMENTS FROM THE DEPARTMENT

UNDERGRADUATE ECONOMISTS RISE TO THE CHALLENGE

OTHER HONOURS AND AWARDS IN THE DEPARTMENT

CAREER AND NETWORKING EVENTS FOR STUDENTS